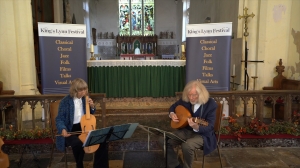 This is an online event for you to enjoy at your leisure and will be available to view from Thursday 10 December at 6pm.

Here is a trailer for you to enjoy meanwhile:

A short programme of some of the earliest surviving instrumental settings and madrigals which survive today. Dating from the 15th and early 16th centuries, many were based on pre-existing melodies.

These two pieces from the late 15th century feature two different pre-existing melodies, played by the lute, above which the viol plays in an improvisatory style. One of the most popular tunes, heard in the second piece, was a ‘tenor’ in slow-moving notes, known as La Spagna,

The first of Festa’s 125 settings of La Spagna is sharply contrasted by two anonymous and rhythmically complex settings from an early 16th century Italian manuscript.

Composed just after 1500, two examples of an early form of Italian madrigal known as frottola (the first introspectively devotional, the second more outgoing and secular) followed by a fast and lively dance-like setting of La Spagna from Spain.