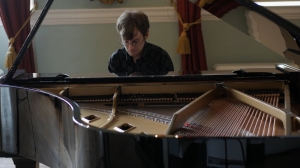 Born in 1685, the same year as two other musical geniuses, Handel and J.S. Bach, Domenico Scarlatti was a son of the illustrious opera composer, Alessandro Scarlatti, the founder of the Neapolitan school.  Domenico was a leading baroque keyboard virtuoso, composing significant works in a dramatic new style that was to be later developed by classical masters, including Haydn and Mozart.  Well over 500 keyboard sonatas of Scarlatti survive in 18th century manuscripts. Marked Vivo, this lively sonata in D has a remarkable polyphonic texture.

Beethoven composed bagatelles, or what he called Kleinigkeiten (‘trifles’), for piano throughout his life (1770-1827). Published some 20 years after their original composition, when he was around 12 years old, Op.33 was almost certainly much revised before it first appeared.   The first of this set of seven,  in E-flat major, is perhaps the most well-known.  It uses the A-B-A form.  The B section in the key of E-flat minor has a second melody which modulates to the original key using the scales of B-flat major and E-flat major before the A section returns.

A Vanity Fair article in March 1925 claimed “Gershwin was working on a suite of twenty-four piano preludes, to be called “The Melting Pot.” In the end, Gershwin published only three piano preludes during his short lifetime. The Three Preludes were first performed by the composer at the Roosevelt Hotel in New York City in 1926.  Gershwin’s style, which combined ragtime, blues, jazz, and classical music, now sounds quintessentially “American” but in his own time, the chords and scales he used were nothing short of bizarre.

The first prelude, in B-flat major, begins with a five-note blues motif and a style that was new and exciting to a 1920s audience.  The second Prelude, in C-sharp minor, also has the distinct flavour of jazz, with the harmonies and melodies built on thirds. Gershwin referred to the piece as "a sort of blues lullaby."  The final Prelude, marked as Agiato consists of features a brief and dramatic introduction followed by a pair of contrasting melodies used throughout to provide harmonic structure, and the piece concludes with a wonderful flourish.

We hope you enjoy the concert - our first online concert in the Festival's 70-year history.  If you would like to express your appreciation with a small donation, please head over to our donation page.  Thank you!