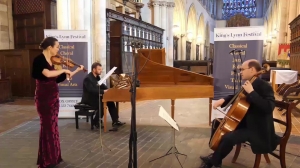 This is an online event for you to enjoy at your leisure and will be available to view from Thursday 11 March at 6pm.

Joseph Haydn wrote this work in 1795 during the final few weeks of his second trip to London. It is perhaps his best-known piano trio, nicknamed the "Gypsy" or "Gypsy Rondo" because of its Rondo finale in Hungarian style.  Haydn spent most of his life as court composer to the Esterhazy family in rural Austria close to the border with Hungary.  Contact with a wide variety of folk music was an inspiration for many compositions and the finale of the Trio includes some “Recruiting Dances”.  These were used by the army, performed by gipsy musicians, in recruiting campaigns.  Pablo Casals, the great cellist, was so taken with the melody of the central section that he would steal it from the violin during the repeat.

Hungarian violinist Dominika Fehér was born into a musical family and has always had a passion for chamber music. During her studies at the Franz Liszt Music Academy Budapest she had regular coaching with members of the Bartók and Kodály Quartets as well as János Rolla, the leader of the Franz Liszt Chamber Orchestra. Upon completing her Masters degree with highest honours, Dominika was awarded the Weingarten Scholarship to study with Oistrakh pupil Rimma Sushanskaya at the Royal Birmingham Conservatoire, where she later became a Junior Fellow as a member of the Bantock Quartet. Their performances included Steve Reich’s ‘Different Trains’ and ‘Triple Quartet’. While at the Conservatoire, she developed a passion for early music under the guidance of Margaret Faultless, Lucy Russell and Oliver Webber, and has become a sought-after performer specialising in historically informed performance practice of 17th – 19th century music.

Dominika has toured the world with leading early music ensembles, such as the Orchestra of the Age of Enlightenment, English Baroque Soloists, Academy of Ancient Music, Early Opera Company and The Kings Consort, and recorded for Signum Classics, Resonus Classics and Convivium. She has appeared at the BBC Proms and also performed at the Royal Albert Hall, Wigmore Hall, Royal Opera House Covent Garden and Royal Festival Hall in London, Carnegie Hall in New York, La Scala in Milan, Konzerthaus in Vienna and National Centre For the Performing Arts in Beijing.

Dominika has broadcast live as soloist in Dittersdorf’s Double Violin Concerto on BBC Radio 3 and given solo performances of works by Bach, Vivaldi, Mozart, Piazzolla, Schnittke and Malcolm Arnold. In 2019 she was a finalist in the Premio Bonporti International Baroque Violin Competition. She plays a Rogeri violin kindly loaned to her by Simon Smewing through the Beare’s International Violin Society.

Andrew Skidmore enjoys a varied career performing on both period and modern instruments. He has been cellist of the Salomon Quartet since 2010, before which he spent three years as cellist of the Fitzwilliam String Quartet.

He is a member and regular guest principal of the Orchestra of the Age of Enlightenment, principal cellist of Collegium Musicum 90 and Ex Cathedra, and plays as a guest principal, continuo cellist and in chamber music with groups such as Dunedin Consort, Arcangelo, Gabrieli Consort & Players, the Early Opera Company, the Academy of Ancient Music, Ensemble Marsyas, the Taverner Consort and Players, Classical Opera Company, Irish Baroque Orchestra and The Sixteen.

On the modern cello he has performed with the Chamber Orchestra of Europe and Cappella Andrea Barca and has been invited as a guest principal with the Scottish Chamber Orchestra, Royal Northern Sinfonia and Haydn-Philharmonie, Eisenstadt.