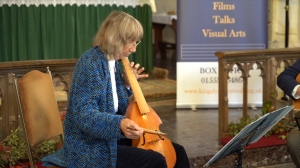 This is an online event for you to enjoy at your leisure and will be available to view from Thursday 18 February at 6pm.

A short programme of mid 16th century instrumental works and madrigals. Some of these are composed over a repeating sequence of chords, called a ground, such as the Passamezzo, while others are based on famous madrigals of the time.

From the treatise of 1553 by the Spaniard, Ortiz, this part begins with two recercadas over the ground known as La Gamba, and between them, a lute solo over the same ground.

Two new parts intertwined with the tenor line of the La Gamba ground just heard are followed, in the second piece, by a decorated top line of the most famous 16th century Italian madrigal. In the third piece, a dance found in an early 16th century manuscript, convoluted rhythms all but smother the slow-moving tenor line.

Two more pieces by Ortiz end the programme. The first is a surprisingly sorrowful setting of La Spagna, while the second is a veritable display of jazz-like improvisations over one of the best known of musical grounds: the Passamezzo.