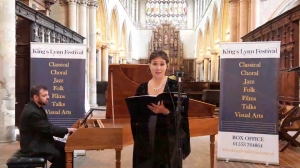 This is an online event for you to enjoy at your leisure and will be available to view from Thursday 7 January at 6pm.

Franz Schubert composed around 1,500 works in his short lifetime, including more than 600 songs. This is the second setting of “At the source sat the boy” or, “The Youth by the Brook”, a beautiful poem of loneliness and youth.  The version was written when Schubert was 18 years old, the wistful revision of a composition of three years earlier.

Dating from 1816, this is surely one of Schubert’s loveliest songs in its use of keys. While in G major it opens in the subdominant of C major, a device used in his earlier An die Geliebte from which he, unusually, borrowed.  In this lullaby the singer, similarly, instructs the nightingale not to wake her lover.  A sudden change to G minor and a succession of D's repeated in the vocal line at 'Nachtigall, ach!' is a heart-stopping moment.  Schubert, with his evocations of nature in song, was to be the inspiration for Lieder written subsequently throughout the 19th century, for example, by Hugo Wolf.

Franz Schubert wrote the dreamy song “To The Moon” when he was 18 years old, and may well have been influenced by Beethoven’s Moonlight Sonata, composed for piano a decade before.  Schubert would no doubt be thrilled that his lunar fascination resulted in having an impact crater on the Moon's near side named after him 160 years later.

Kate Semmens is a soloist with many leading groups and opera companies, and has sung with some of the UK's finest choirs with conductors including Sir John Elliot Gardiner, Paul McCreesh, John Butt and Eric Whitacre.  Her opera performances have included Cupid (Venus and Adonis), Mycene (Isis), Suzanna (Le Nozze de Cherubino), and Mrs P (The Man who mistook his wife for a hat) and Ottavia (L'Incoronazione di Poppea). Kate is a regular performer for New Chamber Opera, with whom performances include Galatea (Acis and Galatea), Second Woman and Belinda (Dido and Aeneas), Orgando (Amadigi), Atalanta (Xerxes), Semira (Artaxerxes), Clarice (Il Mondo Della Luna). She was the title role in Mozart's 'Il Re Pastore' and most recently played Asteria in Handel's 'Tamerlano'. She created the role of Euridice in Caldwells' The Story of Orpheus.  Of her Ciro, in their production of Stradella's Il Trespolo Tutore, Opera Magazine wrote " the clarity and charm of Kate Semmens' soprano was disarming".

Kate has been particularly involved in historic performances, singing the title role in the first modern performance of John Stanley's Teraminta for Opera Restor'd and was involved in performances of Cavalli's Erismena, from the original English edition bought by the Bodleian Library in 2009.

Kate particularly enjoys singing with instrumentalists, and has been enjoying recent performances of Bach Cantatas with violinist Margaret Faultless, programmes with Matthew and Rebecca Truscott, Jacobean programmes with lutenist Lynda Sayce, and viol programmes with Jacob Heringman and Susanna Pell as well as Handel with recorder player Emma Murphy.

Kate has been particularly enjoying performing recitals of music from the pleasure gardens, the anniversaries of Thomas Arne and William Boyce sparking an initial interest and giving opportunities to explore the wealth of this music even further. Her solo CD Delicatessen with harpsichordist Steven Devine and recorded at the Sendesaal in Bremen gave opportunity to record some of this repertoire. This has now been followed up by Delicatessen II, which took his repertoire into even more unknown territory. These two CDs have led to recitals across the country and also to Europe where they have become well known for this repertoire. Kate and Steven also developed programmes of music based around the domestic music of the Bach Household. This led to performances at St John's Smith Square and Radio 3 as well as many Festivals across the country, and ultimately a recording of The Notebooks of Anna Magdalena Bach. All these recordings are available from www.devinemusic.co.uk

Kate is also developing a reputation as a teacher and has spent time in Canada teaching and giving masterclasses alongside Nancy Argenta and Ingrid Antrott  Kate has also given masterclasses at Christ Church Canterbury as well as lectures and talks at Trinity College Music department. She has also spent time teaching and coaching at Dartington summer school and Baroque Week.

Together with Harpsichordist Steven Devine, Kate has been giving day workshops for Early Music Fora across the country based on Restoration Music in the church and on the stage 'The secrets of our hearts' and also based around the music created for the Pleasure Gardens of London.